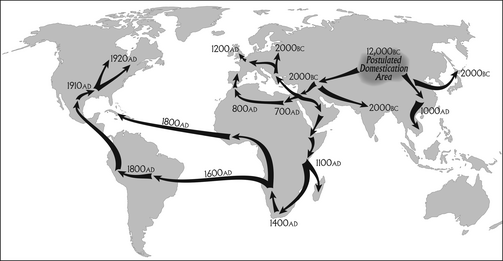 Credit to LIVESCIENCE.com from Marijuana’s History: How One Plant Spread Through the World By Agata Blaszczak-Boxe

Cannabis sativa (industrial hemp and its psychoactive cousin marijuana) started as agricultural products that were raw material for textiles. In fact, hemp appears to be man’s first crop.

The history of this humble botanical is long, wide, and deep. Our intent here is to brush across the top, and provide some links to more detailed historical accounts below.

The story of how hemp and marijuana have been interwoven into the story of man is fascinating. Possibly the first seeds planted and harvested by mankind, hemp has created geopolitical change, started wars, been referenced in the Bible, separated classes, aided man with health and wellness, fueled textile industries, and has been used for spiritual ceremonies across dozens of religions, and inspired political shenanigans!

It is also responsible for accelerating the spread of human knowledge as it became an easily cultivated raw material for paper, which replaced papyrus. More on how good hemp is for making paper later. Hemp’s role making paper production more efficient was even a state secret. The Chinese kept the hemp paper manufacturing process from the Korean’s and the Japanese for centuries. The ability to communicate more widely and easily was both a cultural and competitive advantage.

When man first transitioned from foraging to farming nothing went to waste. If an animal was harvested everything was used. Bladders became water bags, skins to clothing, dried ligaments to fish hooks, and bones to tools and weapons. About everything else was eaten. The same with hemp. The long, strong fibers became fabrics, ropes, pottery, and fuel. It was used as food. Oil was extracted from the seeds and, well, somebody must have been downwind when a field burned and it was discovered that all hemp was not created equally.

Hemp was the raw material of choice for much of man’s modern history with textiles.

That first conversation must have been interesting, given that it took place somewhere around what is now Mongolia, thousands of years ago.

Enkhtuya: “I feel really happy but thirsty. Where is that yak jerky and hemp seed cake from last night?”

Gerel: “Dude, your eyes are the color of the sunset after a windstorm.”

Whether or not Enkhtuya was actually downwind of a burning hemp field, the leaves and flowers of the cannabis sativa plant that have THC (the psychoactive compound in marijuana) have been used for intoxication, medicine, and spiritual ceremony. Apparently, early societies also saw the importance of hemp in the afterlife. Burned seeds were found in Siberian burial mounds that were dated to around 3000 B.C. Other tombs were found to have contained stashes of preserved marijuana (psychoactive).

There are actually three main species of hemp or cannabis. Industrial hemp has very low THC levels, and the plant itself is tall with few flowers. It has been selectively cross-pollinated to produce the long fibers that are best for textiles.

A third species Cannabis rudalis, is found in Russia. It is hearty, and capable of flowering in cold conditions, but has very low levels of cannabidiol and THC.

From Mongolia to the Rest of the World

Over most of the next few millenniums cannabis sativa was used for food, skin care, bedding blankets ropes, building materials, animal feed, and jewelry.  From our perspective, the breakthrough moment appeared to be around 4000 BC when cannabis sativa was first used up for medicinal purposes in China, as an anesthetic to help with pain during surgery.  Although the first documented use in Chinese medicine was in 2737 B.C. 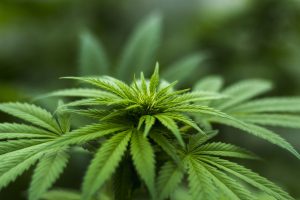 Cannabis sativa is the most common form of the hemp plant. It has varieties with and without psychoactive THC.

A couple of centuries later hemp seeds and hemp farming had made it to Korea. Then utilization spread, filtering into the south Asian subcontinent sometime between 1,000 to 2,000 B.C. All the while, most of the archers in Asia were using hemp bowstrings.

About the same time, Egyptians made reference in scrolls to medicinal marijuana plants and gave it to women to manage mood. Want to really make it interesting? Cannabis pollen was found buried with all royal Egyptian mummies. The Egyptians were also the first to document the use of cannabis sativa to treat cataracts.

Around 500 B.C. hemp was introduced to the northern Europeans by the Scythians. 300 years later the Greeks make reference to using hemp extracts as a remedy for inflammation (and earaches). It was used as the rope on Viking ships up to 900 A.D. Both the Viking and German cultures used cannabis for relieving pain.

During this time Cannabis was also widely used up for health purposes across India and the Middle East. Ayurvedic doctors used hemp, probably as a CBT oil mixed with other oils, and referred to it as, “One of the five sacred herbs that releases anxiety.” It was likely brought the area by Aryan invaders who practiced a religion that worshiped plant and animal spirits and used marijuana in their rituals. Kaneh-bosm is the oldest known name for cannabis, and it is referenced in the bible as a component of healing oil (Exodus 30:22-23 being one occurrence).

In the millennium that followed the birth of Christ, the psychoactive and medicinal uses of hemp and marijuana are referenced dozens of times in everything from Chinese medical texts, to the list of Nero’s doctor’s medical resources.

The invention of hashish was game-changing in the Middle East, as smoking it became popular after 1100 A.D. Shortly thereafter hemp and marijuana are being traded with Africa. A few hundred years later and cannabis sativa crosses the Atlantic with slaves bound for Caribbean sugar plantations. They are allowed to grow it with the sugar cane crops, and consume it when they are not actively being slaves!

Note: In the wake of the 1911 Revolution in China, which severely curtailed opium exports to that country, the rising price of opium led large numbers of users to switch to ganja; accordingly, consumption of imported Indian cannabis soared in the early 20th century soared

Hemp in the United States

By the 16th century, hemp has journeyed to North America, too. French and English settlers grow hemp for rope, sails, and clothing. By the end of the next century, medical marijuana is being sold in dispensaries in New England.

In 1800, the hashish trade is expanding in Russia and China, and smoking hashish is all the rage in France. Marijuana and hemp plantations flourish in the United States. During this time multiple papers on the medicinal qualities of cannabis are published and it is added to The U.S. Pharmacopeia in 1850. From 1850 – 1915 marijuana was sold at pharmacies and general stores across America.

In early 20th-century politics, as it tends to do, created some big problems where none previously existed for marijuana and hemp. The most significant of which was to declare marijuana possession a crime via the Harrison Act in 1914. Ironically, in the next 4 years, legislators would inadvertently grow the black market for marijuana with the prohibition of alcohol, too.

The 1930’s version of “The Deep State” mounted an all-out assault on all forms of cannabis sativa, but the industrial variety was really the focus.

Lawmakers remained intent on eradicating the free market for both industrial hemp and marijuana varieties of cannabis sativa. In 1936 the anti-marijuana print campaign and propaganda film, Reefer Madness was released. By 1937 the complete prohibition of marijuana was in effect and growing hemp or using it in any manufacturing processes was also illegal.

But why industrial hemp too? The answer is, not surprisingly — economically and politically driven. The cotton industry was already feeling the pinch of reduced demand and many cotton products could be manufactured with hemp too. More importantly, tycoons DuPont and Hearst had invested heavily in forestry to supply paper and pulp operations for the Hearst newspaper publishing empire. Together, the 1930 something version of the Depp State successfully scuttled the entire hemp industry with legislation that protected their investment in trees and propped up cotton markets. This in spite of the fact that one acre of hemp will produce as much paper as 4.1 acres of trees over 20 years, and hemp that requires only about 25% of the chemicals required to remove the sap (lignin) for pulp production.

So, in the interest of greed, a far more efficient, less environmentally impactful, and cheaper process was cast aside. In its wake, the backwash of a dioxin driven environmental disaster that killed thousands, polluted waterways, and ruined property values still lingers.

The rest of the 20th century saw the United States government fighting a global war on drugs.  Accusations that marijuana laws unfairly targeted black and Hispanic cultures were virtually impossible not to agree with.  In many states, penalties for possession and trafficking of marijuana could be stiffer than those for violent crimes.

However, in the last 20 years a failed war on drugs, combined with shifting public sentiment and interest in the potential health benefits of hemp and marijuana have led to significant changes.  Prominent among those being the legalization of CBD oil. We will endeavor to keep you abreast of these changes on this site.

But for now, our focus will remain on exploring how CBD oil is being leveraged by humans in the pursuit of better overall health and wellbeing.

Marijuana’s History: How One Plant Spread Through the World

Industrial Hemp: A History and Overview of the Super Crop—and its Trillion-Dollar Future