One mom’s story: A vet with PTSD and CBD Oil

CBD Oil is demonstrating good results as a way to quell anxiety and help manage pain among warfighters returning with PTSD.

Here is one mom’s story of the challenges faced by her son upon his return from a deployment in Afghanistan. Operating from a COP (Combat Out Post) in the mountains near the Pakistani border, her son was the leader of a gun team that supported special operations warriors performing multiple missions against HVTs (High-Value Targets). They engaged the enemy in firefights almost daily.

“We were very active.”

I am a mom. My son was hurting. He’s doing better now …

How big is the problem?

Some might consider the numbers staggering. Others may expect the numbers to be higher. Whatever your school of thought, if a veteran you love suffers from PTSD, you know that numbers don’t matter — answers and help are the only things that matter. 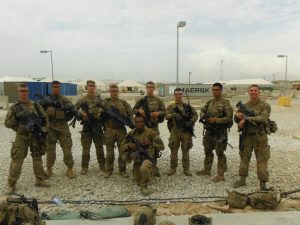 As his mom, I know one of these soldiers struggled with PTSD when he got home. But the statistics say three of them will have PTSD symptoms at some point when they return.

Too often veterans are prescribed antipsychotics for anxiety and depression and painkillers for their physical injuries. While these powerhouse drugs do help and can be vital immediately following injury or surgery, they often have multiple lingering side effects. Then there’s always the possibility (arguably probability) of addiction, and the combination of these “Big-Pharma options” sometimes cause even more problems.

Painkillers are often overprescribed and dependence has led to the current rise in overdoses and abuse of street drugs (namely heroin). We knew this. Yet as miserable as he was, in the back of my mind I was forever terrified that he might find addiction (or worse) to be an out.

For these reasons, CBD oil has become a better and safer option for a veteran dealing with PTSD. The oil helps in a unique way, targeting their stress, depression, anxiety and other symptoms, while also helping their physical symptoms to lessen or subside. The mental and physical aspects of PTSD are deeply related.

Triggers in everyday life are hard to avoid for a veteran and come from a variety of things. For my son, the reverence of a 4th of July celebration invokes unwelcome feelings. CBD oil contains cannabinoids which help to block mood receptors when triggers like that occur. It also improves ‘extinction learning’ – the reprogramming of the brain’s response in certain situations.

We’re hoping our little boy won’t always flinch when a firecracker goes off.

Restful sleep is also a challenge for veterans with PTSD. The CBD oil promotes sleep hormones, regulates stress hormones and blocks reconsolidation memory, otherwise known as flashbacks and nightmares. You don’t have to suffer from PTSD to understand the difference a good night’s sleep can make!

The bottom line is that the effects of CBD oil can offer relief and minimize symptoms to veterans suffering from PTSD. It did with our son, a weapons squad leader and member of the 82nd Airborne, who deployed to Afghanistan in 2012. He was diagnosed with PTSD shortly after he left the military.

He experienced flashbacks, night sweats, nightmares and was drinking himself to sleep almost every night. His fuse was short and he was frequently triggered. He didn’t want to “take drugs” as he put it, but he did find himself drinking too much too often and smoking a lot of marijuana.

Despite sleepless nights and a lot of stress, for the most part, he was always able to maintain a good job and put on a good front. We don’t know how, but working hard clearly helped. Like other PTSD sufferers, was afraid to sleep because he was afraid of his dreams. During this time he also made some bad decisions. He was systematically alienating people who loved him.

When one of his buddies recommended CBD Oil anxiety and sleep improved. He started to do better managing his symptoms. Shortly after he started using CBD he mentioned that he had been at a concert, and said, “The crowd didn’t freak me out.” His symptoms continue to subside and become less frequent. Granted CBD oil is one of multiple therapies that used; he tries to meditate, stays active, talks to fellow vets, and keeps busy at work.

The time he served will always be a very important of his past. He is incredibly proud of his service. And, yes, PTSD will always be a part of his life, too. But he can now manage his symptoms more effectively and appears poised to live a productive, successful and happy life. His career path is bright, and he is climbing the corporate ladder for a Fortune 500 company.

As his mom, this is so much better than when he was living with me after his service, and walking around all night long downstairs. He got help. He managed through, and for him, CBD oil has turned out to be one vital piece of that toolbox.

The Elated Mom of Combat Veteran with PTSD